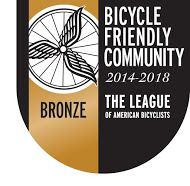 With the announcement of 55 new and renewing BFBs, Pleasanton joins a leading group of communities in all 50 states that are transforming our neighborhoods.

“Working in tandem with the City’s Bicycle, Pedestrian and Trails Committee, we met some significant goals such as installing bicycle detection systems in traffic signals, expanding miles of new bicycle lanes throughout city streets, and working hard to promote bicycle ridership throughout the city,” notes Pleasanton City Manager Nelson Fialho. “We are honored to have been recognized for our efforts with this distinguished award.”