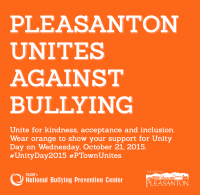 The City of Pleasanton is joining the ranks of schools and groups throughout the nation by uniting against bullying by recognizing October as Bullying Prevention Month.

"64% of children who are bullied don’t report it, and we believe this has become an issue we must all address," said Susan Andrade-Wax, Director for Community Services in Pleasanton. "As a way to raise awareness about bullying and its detrimental effects, not only did we proclaim October as Bullying Prevention Month, but we also are calling on Pleasanton residents to wear orange on Unity Day, which is on Wednesday October 21st, as a way to promote kindness, inclusion, and acceptance for all people."

Bullying has taken center stage in the national spotlight and several states, including California, which has enacted strong anti-bullying legislation. In addition to asking residents to wear orange, there are several other ways in which communities and individuals can get involved.

• On social media, change your profile picture to the Pleasanton Unites Against Bullying jpg, which can be downloaded by visiting PTown Unity Day

• On Twitter, use the following hashtags to join the conversation and add your voice to unite against bullying: #UnityDay2015 #PTownUnites

"We all know change doesn’t happen overnight, but with so many unreported cases of bullying, we need to be vigilant in our ongoing efforts to raise awareness and empower people to stand up to bullies," Andrade-Wax concluded.